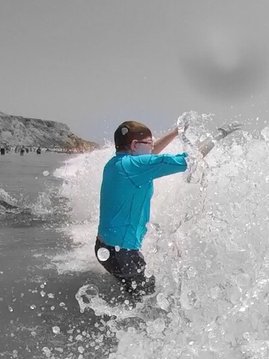 Recently, this story was sent to us by an audiology group about one of their patients who was surfing with cochlear implants while on vacation.

A storm was brewing, and a large wave pulled off my son's entire cochlear implant processor and headpiece. Devastated, he swam in to tell me, but searching for it was nearly impossible in the strong surf. For the next 3 days while the storm raged, I went down to the shore and watched the pattern of the wind and the waves. On my family's last day of vacation, the storm had finally subsided so the I decided to snorkel near some rocks the waves had been hitting. During one dive as a wave pulled away sand from the floor of the ocean, the dad saw something red under a rock. When I swam down to investigate, I found the processor still connected to the headpiece, which was stuck under the rock! When I  pulled on the processor, the headpiece would not budge. I knew that I was running out of air and if he went back to the surface to get a breath, another wave would come and bury the device again. So, I gave one final tug which pulled the headpiece free. I returned to the surface with the entire device! As if finding the processor after 3 days in the ocean was not amazing enough, my family was astounded to see that it still worked!

This is a truly amazing story with a happy ending, but many families and individuals around the world are not as lucky. Some people clip their processor to some part of their clothing only to find it lost after being tossed by a wave, or crashing on mountain bike. Mishaps during recreational activities happen. Unfortunately, for people with cochlear implants those mishaps can be very costly.

As a parent of a child with bilateral cochlear implants, our greatest fear came when our son participated in any activity where there was a chance he could lose his processors. We became helicopter parents even though we never wanted to limit our child’s ability to participate in any activity. As a result of this problem, we created the Ci Wear shirt.

Ci Wear makes specialty shirts designed to secure and help protect cochlear implant processor(s). It has patented pockets that include elastic bands to clip the processor to and a button hole inside of the pocket to run the sound cord under the shirt. This reduces the risk of a wave, hard fall or crash knocking off your processor(s).

If you have ever spent money on a case to protect your cellphone, then a Ci Wear shirt is for you. It is the perfect aqua accessory for your cochlear implant processor(s), and gives you the security, comfort, and confidence to participate in and enjoy all types of activities without the fear of losing your device.